With Valentine’s Day putting red hearts front and center, I figure it’s as good a time as any to share my own story of an ailing heart. Back in 2006, I made a routine doctor’s appointment to check out a lingering cold. I just couldn’t shake a cough and sore throat and expected the doctor to send me packing with antibiotics, as he typically did. Instead, he listened to my heart and determined that I had a slight murmur. It was probably nothing, he said, and went on to do an Echocardiogram, finding that I had a leaky valve somewhere in there. This was Sept. 11, 2006, a date I considered ominous enough without the added burden of some brewing heart issue.

Being one to brush off ailments and generally be mistrustful of doctors, I thought nothing of all the fuss over a heart murmur. I mentioned, in passing, to my husband that the doc wanted me to go in for a CT scan, basically a fancy, detailed x-ray where they feed dye into the body to get a cross sectional image. The doctor just wanted to be sure the leaking valve was something minor and manageable. A lot of young, slim women apparently suffer from something called mitral valve prolapse, where one of the heart’s valves doesn’t close properly, without it ever causing any problem. That was the diagnosis he foresaw for me.

Instead, there were hushed conversations and panicked phone calls hours after I had the CT scan. The doctor had me booked for stress tests and a cardiac catheterization in the weeks ahead; there was a risk that not only did I have a leaking valve but it appeared I may have an aortic dissection that if aggravated could rupture to cause internal bleeding and at worst, death. The way he put it: “If it’s what it looks like, you should be dead. Lifting your children or carrying the stroller upstairs, you could just bleed out.”

My husband was livid. Frustrated and dissatisfied that I was booked to see specialists in a matter of weeks, he made a bunch of calls and came up with the name of a cardiologist at New York Presbyterian Hospital who dealt with cases such as mine. I rang her immediately and was told she was traveling; minutes later, apparently unnerved by the details I had left with her assistant, the cardiologist rang me from the airport. She pulled no punches. If what I told her was accurate, I needed to go straight to the emergency room where she would have a cardio team waiting.

You have to understand, I was at my son’s preschool to pick him up at the time. My son was three and my daughter just 16 months old and still breastfeeding. I had none of my family close-by or even aware of what was going on, and my in-laws, who came from Long Island to help, had never even spent the night with our children, let alone looked after them daily and in a time of crisis. I don’t remember much of what happened next, except that a neighborhood mommy and now very good friend stepped in and took the children home, while I collected myself, rang my husband in tears and literally ran from Cobble Hill to downtown Brooklyn to collect x-rays to take with me to the hospital.

That evening, my husband drove me to the ER, where I presumed I would wait for hours amid true emergencies for someone to see me. Instead, a posse of men and women in white coats sprang into action, studying me and my story over and over and over again. Indeed, I had a thoracic aortic aneurysm; and yes, I should have been dead like so many other young people I have since heard of who just keeled over with the same condition. There were no symptoms, no family history, and no explanations for why I had this or for how long I had it. It was decided that — at just 37 years of age and with no noteworthy medical history — I would have open heart surgery the next day to patch the aneurysm and replace my leaking valve with an artificial one. At this stage, I still hadn’t told my family anything was wrong, leaving that horrible task to my already stricken husband.

My only real recollection through any of it was being wheeled into the operating theater in tears after having to remove my wedding and engagement rings, which I never take off. That’s when I asked the surgeon if I would see my kids again, a notion that until then I hadn’t contemplated. It had all happened so quickly and so extremely,  it was almost an out-of-body experience.

I woke in the intensive care unit with my husband nearby and tubes coming out of my arms and mouth and nose. I was medicated to the eyeballs, so it wasn’t until a day or two later that I even realized how sore I was. The surgery had been a success and besides a whopping great scar down my front and taking blood thinners for the rest of my life, all seems to be well now. There’s still no explanation for how this happened; no family history; no warning signs — I am something of a freak case and as such, am now part of a research study into unexplained thoracic aortic aneurysms.

When I bare my scar, as is inevitable in just about anything I wear, I get plenty of double-takes from people wondering what happened, especially my children’s friends, who ask why that mommy has a big boo-boo. One very hot day last summer, I had beige-colored surgical tape over the scar to avoid it burning; an old woman on a lawn chair outside her Brooklyn home stopped me to ask if it was “the patch.” I never figured out if she meant a birth-control patch or one to quit smoking, either way it amused me. I could cover-up the scar I guess, but why?

Interestingly, as the American Heart Association promotes the Go Red for Women campaign and even Project Runway gets in on it, charging designers with the task of making runway worthy red dresses for women who have been affected by heart disease, I forget that I am one of those women. It was just 15 days between that first doctor visit and the surgery September 26, 2006. The entire process seems surreal, a bit like childbirth I guess, where you forget the agony just enough to contemplate doing it over again.

I rarely wear color but maybe this Valentine’s Day I’ll slip something red over the black New Yorker uniform, and celebrate that my ticker is fit and well. 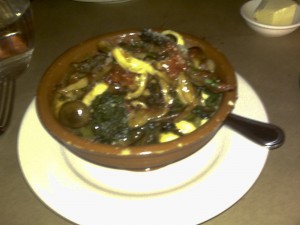 Two consecutive, cold Fridays, while the children were in school, I found myself luring willing diners to Al di La Trattoria in Park Slope just to eat the same dish. For some, comfort food is a bowl of mashed potatoes, a hamburger or ice cream maybe; for me, this restaurant’s version of polenta ai funghi hits the spot. The warm, gooey, not-too-cheesy polenta is draped with vibrant kale and a tumble of braised wild mushrooms. It is deliciously unctuous – filling but not overly so. It’s the kind of comfort food you really want your lunch partner to taste, but not really! With snow falling and Friday just around the corner, I may make it a polenta ai funghi trifecta. 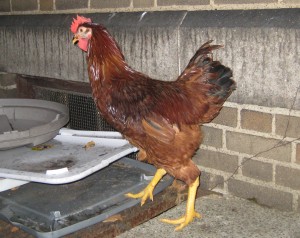 Wandering down our street one chilly afternoon, we heard what sounded like  bock-bocking in the bushes next to our building. Lo and behold it was a big, seemingly lost chook, looking for someplace to park itself.  A call to 311 proved useless because animal control apparently deems it completely fine to keep chickens in Brooklyn backyards, or to have them wander the streets until a cat or car gets the better of them. My feisty four-year-old, a budding locavore, suggested we eat said bird, while animal-loving husband and son set up a cardboard box as a temporary home and surfed the web for other solutions. They came across the eglu, a brightly-colored, modernist chicken house sold by the aptly named Omlet, and aimed at urbanites keen to keep a chicken or two for a supply of backyard-fresh eggs. Just as I was warming to the idea of one of these aesthetically-pleasing coops in hot pink or lime green perhaps, our adopted pet was gone, hopefully back to wherever it came from. Only in New York, I guess …

So I finally checked out the much-hyped new smoked meat joint named Mile End for the historically Jewish Montreal neighborhood where it gets its inspiration. The place was packed with a refreshingly mixed crowd, not just hip, singletons but parents with babies and older couples, no doubt in search of a taste of the Old Country. Everyone seemed happy with what they got; which was primarily smoked brisket on bread with a scrape of mustard, bagels with house cured salmon or turkey sandwiches and the ubiquitous Stumptown coffee.

The very sweet waitress, who was literally run off her feet, said they had cooked twice as much as they thought they would need and still ran out twice  that day. They would have to close for dinner just to get ahead of themselves. The scene hadn’t calmed any a few days later when friends reported lines snaking down the block, even in these chilling temperatures. I had the smoked meat sandwich and it was hearty and tasty, though that deep smoke stayed with me for the rest of the day. My son LOVED the bagels I brought home; I’m told they are flown in daily from Montreal, and their sweet crust comes from a dip in a honey-water bath before baking. The guys sharing our table had Poutine, a Montreal standard of fries, doused in brown gravy and cheese curds, which also looked good, in a rib-sticking, not-eating-again-for-a-month kind of way.

I’ll return to Mile End but perhaps to try something less manly than the smoked meat next time,  if I can ever get a seat at one of the few communal tables.  Mile End is at 97A Hoyt Street,  near Atlantic Ave. in Boerum Hill.