We don’t get out much together. Dear husband works late weeknights, which leaves only weekends for adult dinners. So on the rare occasions we have a sitter and actually do get to go out, it really bites to have a less than enjoyable time.

A long sturdy wooden table conjures notions of comfort and nostalgia. It takes you back to a toasty kitchen, crowded with family and friends and a grandmother or aunts reigning over bubbling pots and roasting pans. The communal table can convey a sharing of bounty and acceptance.

Increasingly, restaurants are installing large communal tables in part to recreate that homely vibe and often times to maximize square footage and revenue potential per customer. To be sure, you can squeeze more paying diners around a long table, than you can fit individual tables, and that matters when space is tight and overheads high.

It can be nice too in a big city like New York where you might be lunching solo with just a book to keep you company. Pulling up a chair at the communal tables at one of the Frenchified global Le Pain Quotidien restaurants in Manhattan, for instance, feels easy and inconspicuous. There is enough space that you can get by with barely a nod at your neighbors, if you don’t feel like engaging them.

And I’ve never thought twice about joining a large round table for Chinese dim sum. In fact, it’s pretty much the only way a singleton or a couple can join in the parade of passing carts to slurp noodles and dip dumplings during bustling weekend hours. Thankfully, people are there to eat, not make friends, so rarely have I attracted much attention beyond the usual stares at another ignorant gweilo.

But the trend has spread from grandma’s kitchen and Chinese brunch to new, hip, happening restaurants – Buddakan, Boqueria, The Meatball Shop, Salt and even the very Upper East Side Café Boulud among them in Manhattan, and locally, in Brownstone Brooklyn, Brucie and Buttermilk Channel and Beer Table.

This brings me to a recent, rare date night when we agreed a little hesitantly to sit at a communal table. The restaurant of choice was crowded and there was a lengthy wait for a 2-top, so it seemed harmless enough sitting side by side at the end of the table. Shortly after we sat down, more people joined the table and the wait staff assumed understandably that we were together. We pointed out that we were separate parties but as timing had it, our orders were taken and food was served in sync.

It was fine for a moment as we kept to ourselves but I sensed that the couple across from us was just dying to make eye contact. Well, I went there; I made the mistake of acknowledging our fellow diners and exchanging pleasantries. I thought we could go on with our meals then, unencumbered, but the chatter went on and on and I found myself trapped in conversation with a stranger as our partners stared into space.

Our date night was being sabotaged by a chatty young woman who, worse still, complained that her meal was overcooked. Here lies the peril in the communal table; friendly neighbors are one thing, but incessant talkers and whiners are deal breakers.

The woman sent back her plate and sat glumly through the rest of the meal, making us feel uncomfortable enjoying our own food. When her check arrived she balked at being charged for her discarded meal and called over the chef-owner, who tried graciously to make amends while we tried our hardest not to listen. It was assumed again that we were a group and somehow we became bystanders to an unpleasant standoff.

What began as date night had morphed into a Seinfeld episode.

I wanted to crawl under that wretched communal table. And dear husband chided me for being sociable. “Don’t talk to strangers,” he urged. “It can only end badly.”

Thankfully the offending couple left and the staff, realizing once and for all that we weren’t with them, apologized for our neighbors and our lost evening. But we were scarred, vowing to never again sit at a communal table as a couple, or unless the sociable one  – me – is gagged.

Sure, communal dining has its merits. It can be nice to see what others are eating, or to join in a party atmosphere if you happen to sit near a fun crowd. And with a big group of your own friends or with children in tow there are enough distractions to ward off needy neighbors. In fact, we’ve had some great dinners with the kids at Brooklyn’s Buttermilk Channel when we’ve landed at the communal table surrounded by families celebrating birthdays or graduations and letting us in on the fun.

But as a couple desperate for some “alone” time, beware!

There are certain foods I love the idea of, but which never really live up to my expectations in their execution; scallops, for instance. Don’t even get my husband started on how many times I have ordered scallops in a restaurant and then been disappointed.

Fried chicken is another. I love the sound of chicken soaked in buttermilk and fried to a crunchy, well-salted shell with tender chicken within, but am frequently underwhelmed, even at restaurants I count among my favorites. It’s me, it’s not you, I want to tell them.

Finally, though, I may have met the fried chicken I always think I am going to get. It came in a huge, thick portion piled on a toasted bun with red slaw at the just-opened Van Horn Sandwich Shop on Court Street, Cobble Hill.

I don’t usually write about places after only one visit but an hour after finishing that sandwich, and I am still thinking about biting into the delicious fried chicken. A pickle and some tastily dressed greens come with the simple sandwich. There are a bunch of other Southern-style sandwiches, including a cornmeal dredged catfish, smoked pulled pork, a blt and a vegetarian version with smoked sweet potato strips, a plt. Plus, there’s a peanut butter and jelly sandwich ideal for kids, and for their parents, a beer and cocktail list.

I have to return with a gro 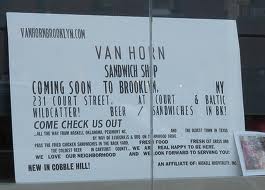 up next time to justify ordering a Pimms Cup and sides of hush puppies, mac and cheese, roasted beets and collard greens.

Van Horn Sandwich Shop is a collaboration between architect Jacob Van Horn and chef Rick Hauchman, who both grew up in Chapel Hill, North Carolina, and crossed paths again years later in Brooklyn. While Southern at heart and in menu, the eatery has a clean, modern feel with high bentwood stools and plenty of bar space so that eating alone, as I did, doesn’t feel conspicuous. It’s also entrenched in the neighborhood by sourcing ingredients from local producers including Caputo’s Bakery and Paisano’s Meat Market.

Until now, the location at 231 Court Street has seemed somewhat cursed. It previously housed Café Ribant, which formerly went by the name Café Mei Mei, and never really took off as either. And it was Jill’s before that. I’m rooting for this sandwich shop, and I think all bodes well, especially with much-acclaimed newcomer Brucie across the road, Strong Place and Karloff down the street and stalwarts like Quercy and Sam’s Restaurant just a  stone’s throw away. 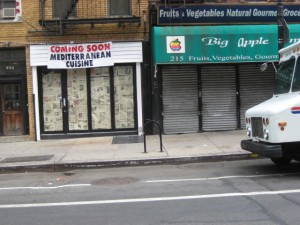